The 1841 census shows that  only The Hope and  Anchor, and the Bird in Hand  ( now the Cove ) offered accomodation. but before the end of the 19th century, and before the Earl Devon of was forced to sell his property here, he encouraged local people to take in paying guests. The history group has copies of wonderful comments made by visitors before the Great War praising the peace of this area and wonderful food and hospitality.  By 1910 just the Hope and Anchor provided some accomodation and 19 locals in Inner and Outer Hope . The first  named Hotel was in 1927. This was the Cottage Hotel.

Hope Cottage was built for Samuel Barrington Tristram, started in 1894,  and where he lived all year around. It was the very first property on the cliff.( Excluding St Clements Chapel of Ease and school room ) He returned to the home counties before the Great War and during the war moved around, but spent much tme in the Chagford area. His  widowed niece Eleanor  Appleton, who endowed the Fishermen's Reading Room,  lived  in Hope Cottage and is was the base for two nephews both of whom were killed during the  hostilities. From 1910's 20's 30' and onwards. The Cottage was surrounded  by more houses. Visitors and travellers wanting accomodation were routinely directed to the cottage and it became the Cottage Hotel, run by Miss Ward and her parents; by 1936 in had grown to 26 bedrooms. Miss Ward  married Dudley Holliday; When they divorced he kept the Hotel and subsequently married Clarrie Boyd/Powell  and extended the hotel. In 1955 they incorporated Westerleigh, which  Elaine, whose  Hill family house it was, tells me  was built in 1929. 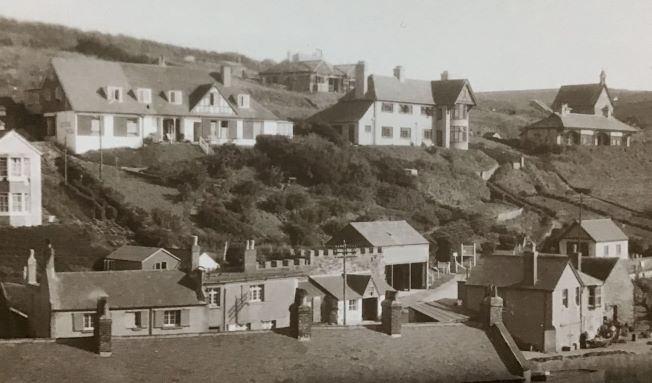 The Cottage and Westerleigh

The Cottage Hotel has given refuge to many ship wrecked  sailors and passengers, famous people and during the war firstly to an evaccuated school and then to officers from the Air force. Film crews, and  families as well as local people have all enjoyed the hospitality of The Cottage. Five families have been at the helm, including the Irelands for the past two generations.

Grand View  hotel has had an interesting history built and run by Joe Taylor (who had been the landlord at the Hope and Anchor) in 1930's, and extended to 20 bedrooms, and a licienced premesis in 1937 . At the outbreak of war it was firstly used as a place of R and R for the Black Watch, Then briefly by Baston School, a school for boys and girls under eight from Hayes Middlesex; and then in 1941  when it was requesitioned by the RAF, the school went to Somerset. Ann Rogers and her sister went  with it until 1944.  Meanwhile, Joe decamped to the Reading Room. In 1970's? Joe and Dudley were in competition to add more bedrooms. Grand View is remembered for the petrol bowser which is still there, and the garages behind where locals ran a canteen for the forces. Grand View was next run by the Le Cheminants,  their son Richard wrote some excellent books on village history .Around the mid 80's Grand View  was  owned by John  Kranen. He had run a four bedroom nursing home at Arum lodge, which was very popular so he extended into  (The rather oddly named) Grand View   Sadly despite its  great popularity and efforts to meet council requirements the Nursing Home was forced to close in the late 90's and then became holiday flats

Greystones hotel built as a guest house in the 1930's was run as a Guest House by Bertha Leseleur, but it was  bought by the end of the war by Frank and May Beckwith who added a dining room, new kitchen, bar and family flat.They ran the hotel employing local people for 20 years. Next the Pophams took over the reins, and also contributed to village life. When they retired it was bought by a man wanting to turn into a family home, but was told it had to remain an hotel. It appears to have  been left to deteriorate  ever since; it now has holes in the roof  The planning restriction remains.

Lantern Lodge was built in at some stage during the firs two decades of the he 20th centuary.  It had identical roofing tiles to those on the Reading Room which we know was built in 1908. 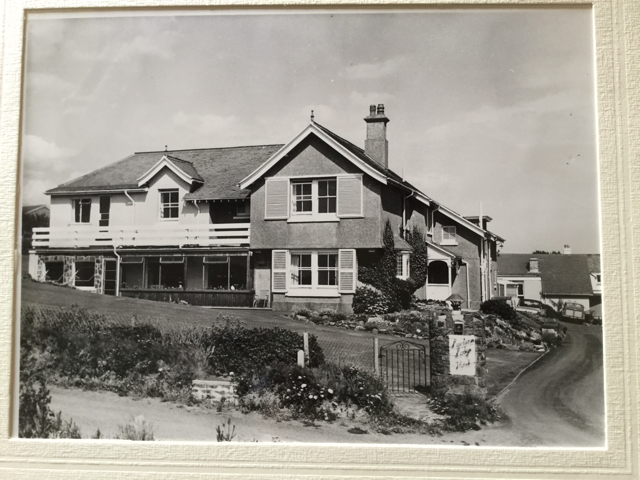 Originally owned by the  Georges and run as a guest House, it was then  taken over by Mr and Mrs Leslie ( Mr Leslie was confined to a wheelchair.) Around the mid 60's it was bought by the Christophers and run as B and B and Guest House  who extended it to  become  an hotel of 7 bedrooms and in 1974 a new wing was added with six new bedrooms. A developer was given permission to  pull it down and replace with flats in 2020

Sun Bay was built in 1951 for a Mrs Cox and later run by the Graves. n 1971/2 Tom Barben put in Dormer windows In 1974 Peter Pedrick purchased the hotel and so the number of hotel beds increased, providing local employment, and  bringing guests to the village.  Peter was followed by Chris Moon, then Johnny ?? The next owner applied to extend the hotel. This did not happen; the current owner changed the name and it  has now become  a restaurant with bedrooms.

The 1950, 60' and 70's  saw th additon of the Lobster Pot Hotel and the Hope Cove Hotel, Tanfield, Sand Pebbles  and the Crest. There were also numerous small guest houses.

The Lobster Pot was in the  1950's,  one of three houses, previously a hay barn right near the beach, The Stuart Murrays who lived in the Ridge up on the cliff towards Thurlestone with their son Malcolm and 4 adopted daughters including twins, moved to the Lobster Pot and opened a tiny bar/club with a dining room, very popular with the locals ( I have my life membership card somewhere) it had a wonderful 6d slot machine which paid out handsomely. When the Stuart Murrays  separated  Nora Whitty bought and extended the house and it became an hotel with  twenty rooms and a pent house flat. In 1969 Gillian remembers working there when she was 16. By the mid 1970's Mr and Mrs Brooker who lived nextdoor in The Moorings took over. They moved into the penthouse flat extended underneath, let out their home as two holiday flats  and ran the hotel for many years. The bar was also a popular meeting place for locals in the winter. Lynn and her lovely parents  Gorden and Betty and her partner then ran the hotel. When that arrangement ended, the place seemed to deteriorate and part became became a family residence plus holiday flats .

The Hope Cove Hotel  grew from  a 1920's property  and was run by Clarrie's nephew Roy  in the 60's and 70's It  was very  popular with divers, it also had a small bar open to non residents. By the 90's it became holiday flats.

The name Bay View was originally used for the place which had been  The Bird in the Hand Inn  when the name became free it was taken by the Maws. Their original house was called Barney Bank, which name they took with them across Chapel Lane to the long bungalow ( now the old Colonial House)  their daughter Pam used Bay View  name for the family's  original house and for a while in the 1960's ran it as a children's hotel. .

Sand Pebbles  was develeoped from Faith House by  the Hassel family in the 1970's. ( more on Faith House in the next blog )and remained as an hotel until very recently when permission was given to pull it down for yet more holiday flats

The Crest   a small  hotel was run by ? Mr and Mrs Conway .It was the first hotel to have an electric generator and had a tennis court. The Crest  was also requesitioned by the RAF during the war. 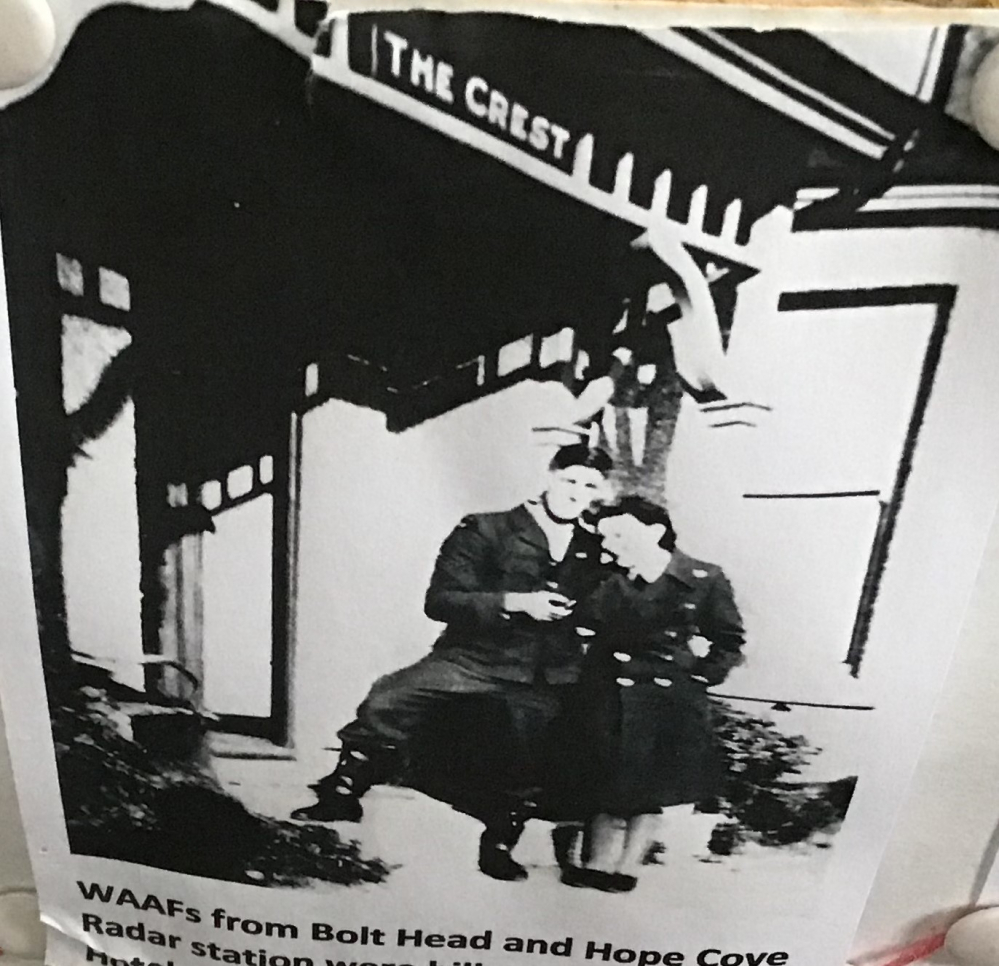 Some time after the war the Crest was contacted by a national chain of Crest Hotels, who when they found that " our" Crest had used the name longer than the chain, agreed to pay the owners  a  tidy sum to stop using the name and the hotel was closed.

I am sure there are inaccuracies with names and dates, and corrections will be welcome,  A number of peole gave me their recollections for which  very many thanks In age order !!! Thanks go to Elaine G Ann L,  Owen M, Peter P, Colin TH, Gillian A, and Brenda B.

The many family run Hotels and guest houses provided happy holidays, services, local employment and  centres for locals to enjoy. We are now left with one, the oldest, still giving great service and a  centre for the village. Long may it continue.   mm 07. 21.

more photographs will be added as they become available.