Within the space of a lifetime the old road along the cliff from Outer to Inner Hope above Harbour Beach has been eroded away. In 2014 Mouthwell Beach the cliff path was claimed by the sea necessitating major work for repair. These are reminders that Hope Cove is under constant attack and it is sobering to imagine what the village would look like were it not for the sea defences put in place over the last 150 years or thereabouts.

There are three agents at play here. The sea, the underlying geology, and the influence of man. Using the legacy of picture postcards it is possible to get an impression of the changes undergone and to speculate on how things looked before and what they might look like now if man had not fought back.

Mouthwell beach has seen considerable erosion during the photography era. The hidden legacy of picture postcards is the history they record and we have some 150 years to draw on. The beach is prone to scouring. The westerlies slamming into the beach will sometimes leave it sandy and other times leave it very rocky.

To understand the situation it is necessary to look at the way Outer Hope Village has formed. To begin with there is a major fault running through the village and then on out to sea. The fault line can be seen in the image below looking like a road heading out to sea. This fault is due to the older rocks to the south colliding with the older – and very different rocks to the north of the beach. 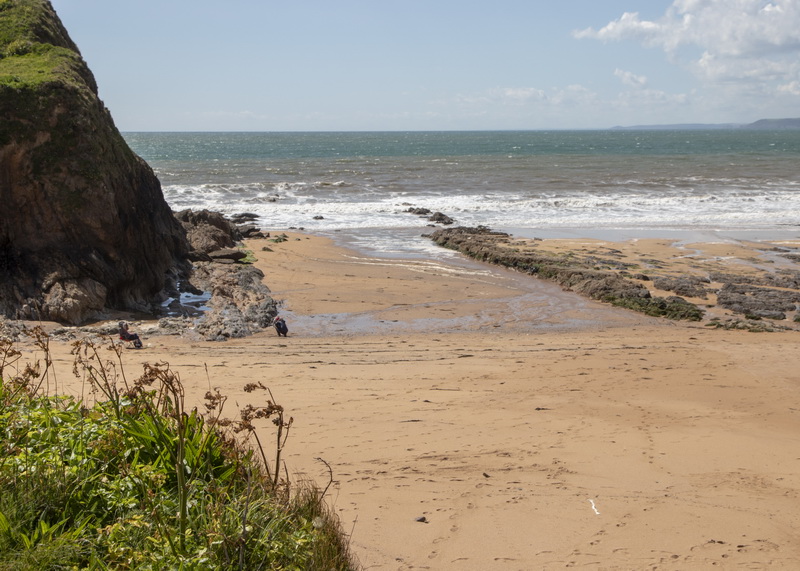 In addition to the head-on collision there has been some sideways movement between the two rock types which breaks up the structure of the rocks. The significance of this is that fault lines provide an easier opportunity for erosion by water. The valley from Galmpton down to the sea has been carved by the innocent looking stream which now discharges on to Mouthwell beach. During certain geological times such as emergence from the last ice age the flow would have been considerable. The debris worn away now provides the 2-3 metres of head which the village centered around the square now sits on. 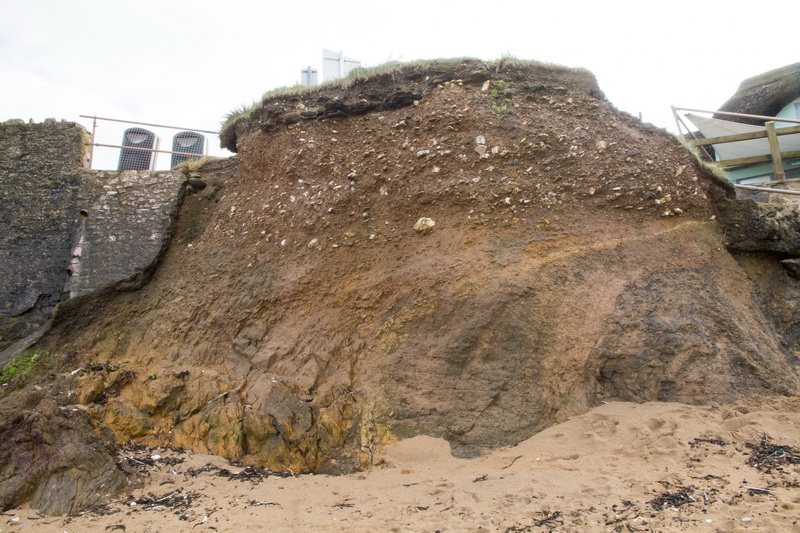 The image below shows the likely appearance of the village area before the formation of Mouthwell Beach.

The valley side is intact and the hard rocks of the cliff is under attack by the sea at the fault line. The brown lines represent the erosional deposits. When the cliff is breached along the line of the fault the sea has an easier time scouring out Mouthwell beach.

The earliest pictures of the beach show changes over the last 150 years. This was taken around 1860.

It shows 8m or so of paddock to the right of the path which has been lost to the sea. This also shows the part of the path destroyed in 2014. Follow the link below to see a video of Mouthwell under attack and the path collapsing.

When descending the track to Mouthwell there is an area of green to the right which for the want of a name I will call The Island.

In the photo above there are the remains of four walls. It is intriguing to speculate whether this might have been a pound or if it is the remains of a building which stood there when the cliff was further out. It seems reasonable that the island and the paddock were connected maybe in the 1700s.

The island provided a pleasant spot to sit and look over the beach but the two pictures below with 100 years between them show how quickly it is disappearing.

This image below taken around 1900 shows how low the base rock sits with the vulnerable head above and the sea wall offering protection. 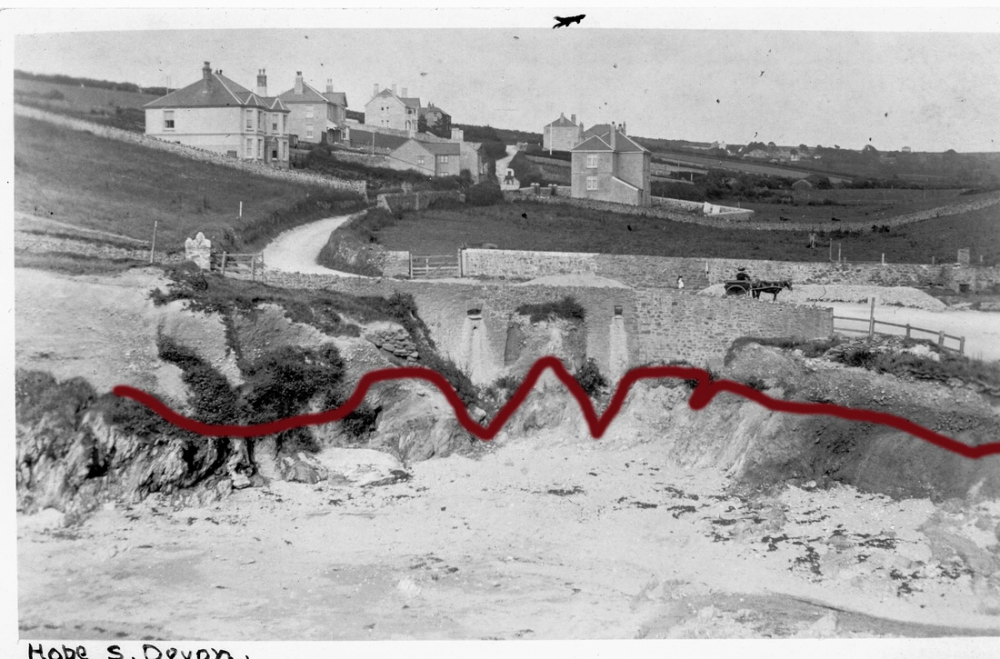 It is difficult to work out when the wall was built but from the state of it that might have been mid-1800s. Zooming in reveals a segment of an earlier wall some 2m out that succumbed to the fierce seas. 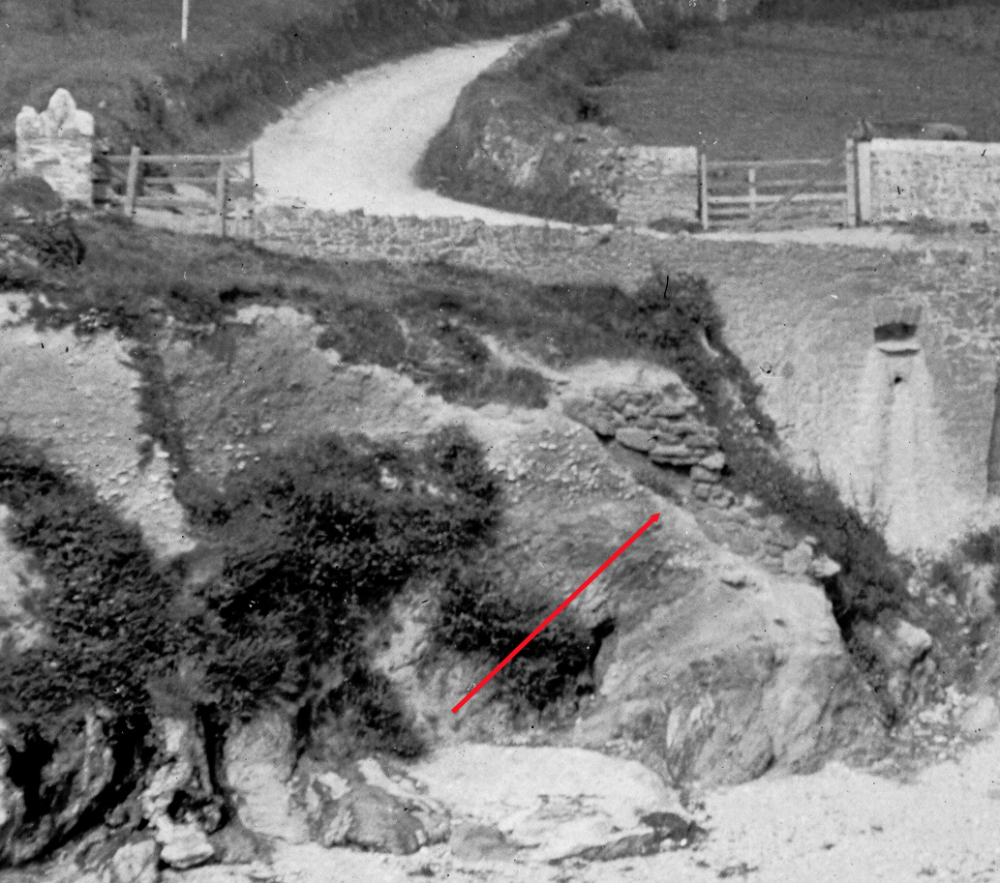 At the south side of the beach concern has been shown for the thatched cottage – The Cabin – and the Shippens in general. In the early part of the 1900s it seems the protection for the square and The Cabin consisted of tipping rubble over cliff.

Around 1930 the first serious preservation began with support for The Cabin.

This stimulated more support over the next ten years.

The extended wall was built before the war. As part of the military defences a pill box was built on the wall and removed around 1950.

It is curious to note that the main wall protecting the square was not built until the 1950s. Clearly the dynamics of the marine onslaught is less damaging in that area.

The  valley leading to Inner Hope was formed in a similar way and as can be seen from this clip https://www.youtube.com/watch?v=E3UX6Pnmbvo can be subjected to some frightening waves. However, the sea wall was built in 1933 and there doesn’t seem to be the same level of damage.

It is interesting to speculate what Outer Hope would look like without its walls. At Mouthwell the beach would have advanced towards the car park wall and maybe the road running parallel to the track down to the beach would simply be a foot path. A travel writer around 1900 wrote that the Shippens was on its way to becoming an island. With a two-pronged attack from the Cabin area in the south of Mouthwell and from Shippen House on Harbour beach the sea may well have nibbled out a fair bit of the low lying 66m between the beaches.

Enjoy it while you can and keep taking pictures for the benefit of future historians!