Well, may be not quite, officially Old Masters were artists painting before 1800, but artists have been drawn to Hope Cove since the mid 1800's. Thanks to research started by Mike Clark, we know about renowned artists who came to Hope Cove and Galmpton. In the mid 1800's The Earl of Devon encouraged his tenants to supplement their income by taking in paying guests, and started to build lodgings for sea bathers. In June 1875 James Hook RA came to Hope. He painted Crabbers https://manchesterartgallery.org/collections/artist/?mag-agent-2558 and Sea Ducks in Hope Cove. Hook came with his artist wife Rosalie Hook and their two sons, Allan and Bryan, also artists. Rosalie says in her diary that lodgings were hard to come by for four, so the family split between Mrs Osborn, Osborn House ?? and Mrs Blank. The Blanks ran the Hope and Anchor, so presumably they stayed there. The family also painted further along the coast at Hall Sands. Rosalie's diaries show that althoiugh having a small estate in the Home Counties, the family were moving from place to place painting for over 40 years all around our coastline and abroad. Hook encouraged Sir Luke Fildes to visit Hope, where he  studied the cottage interiors, the basis for his painting The Doctor, which hangs in Tate Britain.https://www.tate.org.uk/art/artworks/fildes-the-doctor-n01522  Also in the History Group's book, Mike Clark also tells us that George Henry Jenkins (senior and/ or junior) also painted similar scenes to those of Hook, plus the Eddystone Light House. Curnow Vosper made a portrait each of William Thornton and Captain Ash when he visited Hope Cove around 1890. Most of Vosper's work is hung in Cyfarthfa Castle Museum in Wales.https://artuk.org/visit/venues/cyfarthfa-castle-museum-art-gallery-6371

In the late 1890's the first artists to live as well as work here were to be found in Galmpton. Henry Edwin Tozer RA,  seascape artist,  (father of the better known artist Henry Edwin Spernon Tozer, who specialised in cottage interiors), had been living in St Just Cornwall with his wife and family. Also living in St Just, where their father was purser of the mine, were sisters of independent means, the Miss Boyns. Considerbly younger than Tozer, Bessie Boyns RBA was apparently a vivacious young woman, artist, sculptor and musician, and her younger sister Gertrude was a talented pictorial photographer. In the late 1890's Tozer and Bessie shared an exhibition in Exeter; shortly after this Tozer's daughter married and his wife moved to London with the newly weds,  Tozer then left St Just, (where his two artist sons remained,) and moved to Galmpton to the cottage near the church with the two Miss Boyns. Tozer's wife  (who died in the early 1900's,) is described in the 1901 census  as a widow) but Tozer, who was very much alive never remarried. He and Bessie held another exhibition in Kingsbridge in 1912; Tozer died in 1913. 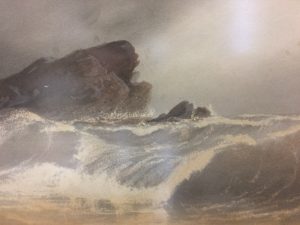 This is  a Tozer watercolour in my collection. Gertrude, who produced some beautiful postcards and portraits which can still be found, died in 1928; Bessie continued to paint, be church organist, and give music lessons. She died in 1948 at Galmpton Cross where she and her piano were cared for by a local lady in her final years One of her paintings hangs in Penzance. https://www.penleehouse.org.uk/. Tozer, Bessie, and Gertrude lie side by side in Galmpton churchyard. Tozer's stone is rough granite carved with an artist's pallette, presumably sculpted by Bessie. We can only speculate on their relationships ...................................  In the 1930's Frances Young  bought Poole Cottage Galmpton with her daughters Violet Mary Smith, and Doris, they were all miniatrists and exhibited at the RMS. In 9141, when the tenents left, Doris bought Rose Cottage next door. ( it is now one cottage) . I believe that her painting of daffodils in her garden was bought by Queen Mary  and is in the Queen's  Collection.

In the 1980's Challis, a local artist, encouraged the restoration of the dilapidated Fisherman's Reading Room, and then used it to hold exhibitions of his paintings in the visitor season. Happily, talented artists continue to come and paint in and around Hope Cove.