The stong winds and big seas of this early November brought to mind "our" Eddystone Lighthouse and the great storm 1703.

The Eddystone reef consists of three  ridges of spiky rocks and two central rocks 14 miles SSW of Plymouth. For centuries the reef claimed the lives of countless sailors, increasingly so in the late 1600's when with increasing trade routes to the Americas and the East, Plymouth became an important port.

The late 1600's was also a time when wealthy gentlemen began to invest in more risky ventures like mining and ships, where fortunes were made and lost.

Enter the  clever and eccentric Henry Winstanly. Born to a modest but noteworthy family in Saffron Walden Essex, he started work as a porter at the nearby Audley End House, (seat of the Earl of Suffolk, and later a palace for Charles ll,) where his father was a steward, Henry worked his way up to become Clerk of Works aged 25. He was encouraged to travel and learn. He was quick to learn about mechanics and engraving whilst in Europe. He increased his income by doing engravings of stately Homes for their owners. He built his own house in nearby Litttlebury, facing the main route between Cambridge and Newmarket. It was no ordinary house, it was large with a windmill and stream in the garden, a clock on the gable and a lantern on top; the entry gate was a turnstile to his "House of Fun" or House of Wonders. Visitors, including the King came from miles around and paid to visit the house. Inside you might sit in a chair and find that the arms folded around you holding you captive, or shot you backwards out of a window and suspended above the stream.The house, with it's mechanical organ brought  Winstanly wealth and fame.

Although not born a gentleman, Winstanley began calling himself a gentleman, and moved to London where he opened a "Water Theatre in Piccadilly. Showing his mechanical, hydraulic and pyrotechnic inventions. In 1795, Winstanly now 50 years old had invested in five ships; when two of these were sunk on the Eddystone Reef in that year he set off for the week long ride to Plymouth. Until the the longitude problem was solved in the late 1800's allowing the location of Ships to be calculated, the call for lighthouses was increasing. The only ones existing were at the entrance to harbours or on promintories.Winstanly had no knowledge of the sea, or marine design, but this did not deter him seeking more fame and fortune.

In early summer 1796 Winstanley set out to survey the Eddystone Reef. A six hour row in either direction, with a very tricky approach to the central rock, and facing the worst of Atlantic weather. Winstanly knew nothing of soldaring blocks together with lead, but designed an elaborate and fanciful design for the 80 foot tower. Twelve foot of stone base held to the rock by iron rods and bands, next a tower for living accomodation and supplies and finally the lantern top. Building could only happen in the short summer months, the first year saw the ironwork, the next  the shaped granite blocks carried out from Plymouth, and the central  highly decorated living section, and another to finish the octagonal lantern and mechanics. In November 1698 with the lantern not quite finished, Winstanley and friends went out to light the 60 candles. The weather then turned so bad they were marooned for 5 weeks. This was the first lighthouse to be off shore and was greeted with joy.

In 1699, perhaps because he had spent 5 weeks marooned in it, Winstanley returned and strenghened every stage of the building and raised the lantern by another 20 feet and installed cranes for supplies. Each year he retunred to make repairs and improvements. His fame increased.

November 1703, saw a ferocious storm, as weather improved, and against local advice Winstanly wanted to be in his lighthouse  for urgent repairs during a great storm. Spring tides on 26thNovember were higher than ever remembered with westerly gales; 20,000 chimney pots came off in London and over 17,000 trees, loss of life was immense.

The Eddystone light was seen at midnight, but by morning there was no trace of the Lighthouse or Winstanley. 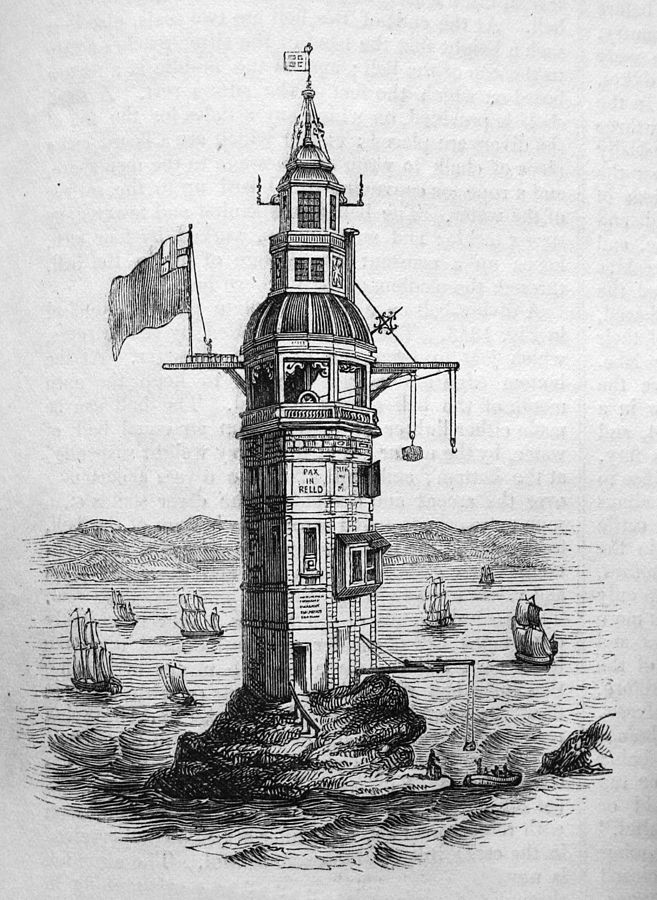