Hope History group is quite small, but we have gathered a lot of information over the years. As there are many second and holiday homes it is not easy to recruit members,  but we have a lot of interested friends, and we are eager to share the information we have, and to ask for more. I will post each month about some of the interesting things we have discovered over the years, plus the photographs, and private research members and associates have carried out. For this first post a relic from 1939!

Last month we held our annual cream tea courtesy of the Cottage Hotel. We invite people we know of, who were brought up here, or have a long standing association with the parish (the parish and group cover Hope, Galmpton and South Huish) Not only were more “new to us” photographs brought along, but also a citation, and a wartime diary for Tom Windle to copy; and most excitingly Ann Hurrell brought along an 80 year old sandal which had belonged to a crew member from the Tajandoen the Dutch merchant ship that was hit by a U Boat in December 1939.   Forty seven of the fifty four crew and 14 passengers were rescued by the Louis Sheid, (a Belgian ship) after the  Tajandoen was holed; then, as the Louis Sheid was making a getaway  she foundered on the Books Rocks between Hope and Thurlestone.  There was no Lifeboat stationed in Hope at that time, so the Salcombe boat was called; coxswain Eddy Distin picked up local fisherman Jack Jarvis en route as a pilot who knew the Books rocks was needed. The tide was incoming, and the  Louis Sheid broke in two.  Several trips were needed to rescue the crew who were taken to Quay sands off Hope, where local fishermen waited to ferry them to the shore. They then made their way to The Cottage Hotel. Mr Cox who owned the village shop, had been in the Merchant Navy, was one of the Rocket Crew assisiting at the wreck; he had seen that the Captain of the Tajandoen was very agitated about the papers he had rescued which were very wet, so he invited the Captain and first Mate to the  village shop  where Mr Cox helped the captain dry out the papers he had rescued; whilst this was happening Mrs Cox made hot drinks and mustard foot baths for the two men who were very cold. Up at the hotel the chef John Harvey  was roused and had an hour to produce a hot meal for 47 and put hot water bottles in 47 beds. Some of the crew of the Tajandoent were merchant navy from the Far East.

The sandal is wooden with signs of once having a thong and has the date 7th December 1939 carved into it.  Colin Harvey took this photograph. 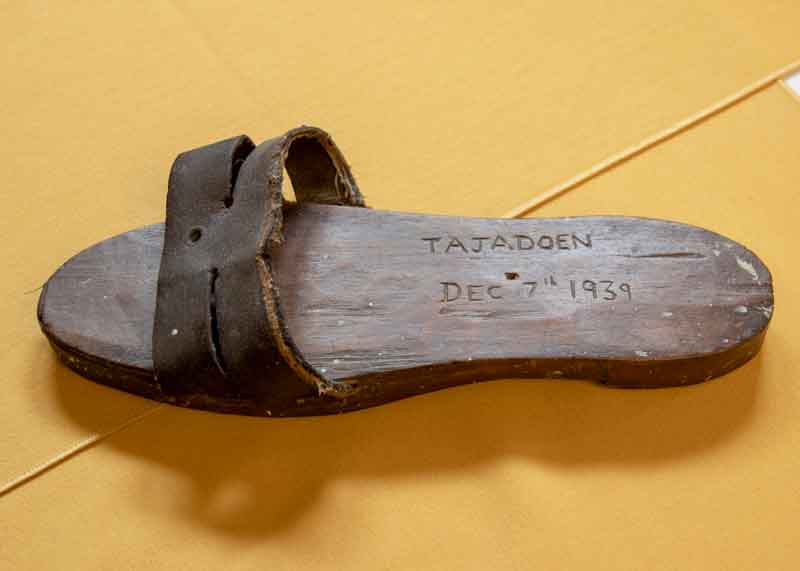 This is a  photograph of some of the survivors  of the Tajandoen in the lounge at the Cottage Hotel.

Does anybody know what became of any of the crew of the Tajandoen or the Louis Sheid ?

And finally for this month:

The parish church, Holy Trinity  celebrates  being consecrated 150 years this June, Tom is collecting memories of the church, so any photographs, or recollections would be most welcome.  maz