Early hotel brochures often described Hope Cove as " A Sleepy Fishing Village," but  was it ever the case?. Tales of  smugglers in earlier centuries indicate they were lively and interesting times, locals outwitting the many coast guards working in the village,with plenty of contraband. So sleepy probably not, but is was a fishing village.

There have always been fishermen,by 1905  there were around 17 full time fishermen. The boats were all  wooden similar size, and there was no shelter on the boats or for the boats, which were powered by oars. Most fishermen did not swim.  Earlier the catch had been pilchards, but when they went away, pot fishing took over, as well as net  and rod fishing. Fishermen made their own pots, from locally grown withies, and mended their nets sitting on the beach. Nets were also treated with a preservative made in a big vat which stood on what is now the tiny carpark beside the Hope and Anchor. Many fishermen from Inner Hope  were chapel, so non drinkers,  though there is a story that some of them may have gone up to Galmpton to the Fountain Inn. In the winter fishermen took on different jobs, rabbit trapping, hedging and tree felling.

The Earl of Devon wanted to encourage tourism in the 1890's the first second home, Hope Cottage, was built in 1894, and fishermen took lodgers in their tiny cottages. The History group has copied wonderful entries in Mr and Mrs Hurrell's visitor's book, from around 1910, the peace, and wonderful local food were always appreciated.

In 1908 to cater for fishermen in an alcohol free environment, Eleanor Appleton did what a lot of  what Edwardians did which was to endow, in her case in memory of her husband who was the recorder of Grimsby, a Reading Room. A place where the men could relax read papers and books, and play board or table games. No alcohol was allowed and no political meetings. A good alternative to a public house in Inner Hope.  Most fishermen were men of faith. Ike Jarvis  was one. He was steward of the Chapel in Inner Hope, and in the 1920's he undertook what was for the time an extraordinary trip to the Holy Land. Ike wanted to "Prove" the bible by visiting the places. He was disappointed when he found that even then, the sites were commercialised, so went  to the Sea of Galilee. Although there with no common language he  connected with and went out with local fishermen. Nobody knows How Ike made the journey. 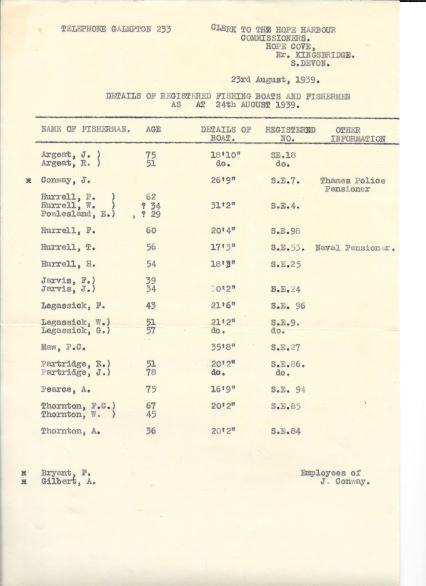 Thanks to this list, shared by Hugh O'Neil, we know there were 14 fishing boats,and 21 fishermen registered  in Hope in 1939, all local names and mostly elderly or middle aged. We would love to match the names of boats with the registration number, though these did change.  We know SE27 was the Pampadeter. The boats by now varied in size, some had engines and shelter on board.

After the war the number of fishermen reduced, but some new blood came in the 1960/70's including Chris Jepson with his boat Mowenna (a wooden boat he built in Galmpton,)  David Morgan, and  John Brannagh and Ian Pedrick, with boats made of modern materials.

Fishermen could supplement their earning running fishing trips for visitors. Fish was often for sale on the beach, and John Jarvis was a familiar sight with his boat and his tractor pulling the store boxes. Conger eels and Monkfish are remembered on the slipway.

Nowadays although there is one fisherman still living in Hope, but David  fishes out of Salcombe, a couple of others live in Malborough. So do you thinkis Hope still a fishing village?  Well in the tourist season, it is not sleepy.

Thank you Brenda  for great information about your great grandfather Ike.