Entertainment instead of snow

I had been expecting to write about bad winters in days gone by, but as we haven't had any snow...yet, I thought I'd save the snow stories, and thought instead  about what we are missing during the pandemic, and  one of the many things is entertainment especially dancing.

There have been dances in the village hall including during the war with  the forces billeted here, hunt balls at The Cottage hotel, and Christmas parties of all sorts, and  Maypole dancing in Inner Hope. 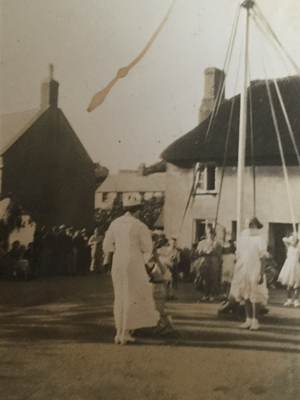 Also in the field, (now the carpark) beside the Hope and Anchor. This was also the place for football matches, tug of war, and fancy dress  etc. 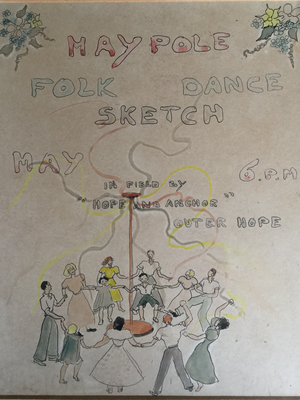 Any visitor who has been here during the summer school holidays in the past 52 years will remember Wednesday evening country dancing in the square in Outer Hope.

The South Hams Folk Club grew from an Adult Education Class started by Roy kendall in 1968. A few ladies from the parish, including Judy Worth and Sheila Jarvis went along. Husbands joined the ladies for the Christmas party,  and the club took off. Since then every summer school holiday folk dances have been held outside the Hope and Anchor with club members and visitors, especially children. In the early days the late Frank Millington played the accordian for the dancing, then Phil Worth provided the music as well as calling.Phil has been told that the second generation are now joining the dancing, if you have pictures of the two generations, yourself dancing as a child and your children, we would love to see them.

Many thanks to Brenda Brocklebank for the picture of some of her family dancing in Inner Hope and the poster for dancing.

Entertainment instead of snow