A very photogenic part of the world.

The arrival of the actor Jim Broadbent in Kingsbridge last autumn to shoot some scenes for a film "The Unlikely Pilgrimage of Harold Fry" prompted some old memories. Who remembers  1950's Tv series Quatermass ( which terrified me) and later the first series of "Maigret" in the early sixties both of which starred Rupert Davies ? The connection to the town is that Rupert Davis' sister ran the cafe called "The Cat and Fiddle". This was in the Shambles. Please look at the amazing  granite columns in the Shambles 1000 years old, and once part of the local slaughter house.

The earliest films I know about in Hope Cove were the family films made by the Hill family in the 1930's and later ones made by Dudley Holiday in the 50's. including rescues, and events. Dudley's nephew Roy Oakshot, long before Monty Python, was making wonderful " Pythonesque" comedy films using local talent. Who remembers Bob Wilson in his uniform holding back the crowds, for a "royal visit" his arms outstretched  with the "crowd " all standing behind his arms with space all around, also the delivery to the Old Radar station of what looks like a bomb carried through the bracken  by a belly crawl, then a close up to show it to be a grocery delivery.

The first commercial movie that I know of (thank you Owen) was "Brandy for the Parson" in 1951, starring Kenneth Moore, most of the film was shot in Salcombe, Kingsbridge and Dorset, but Owen recalls a  scene with donkeys carrying brandy up the beach in Hope.

In 1552 the film made for the Coronation which toured the country, started with a shot of Inner Hope square with sheep and lobster fishermen. There was a later shot across Bigbury Bay, shot from Mouthwell beach. 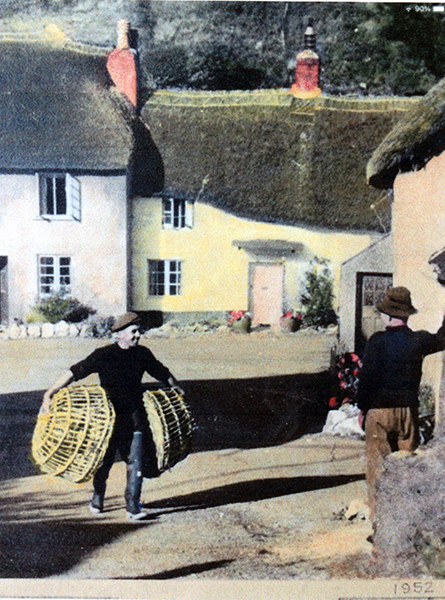 Back in the 60's during one winter Robert Bolt and Dame Maggie Smith stayed in Inner Hope where Robert wrote the screen play for the musical, Half a Sixpence. This was an adaptation of HG Wells' "Kipps". I wonder if they ever visited again.

Great fun was enjoyed in the late 1970's/ early 80's when Comic strip shot some of their film 5 Go Wild in Devon . Many of the actors stayed at Lantern Lodge;Robbie Coltrane, Nigel Planer, Ade Edmundson, Jennifer Saunders, Danny Peacock and Keith Allen amongst others plus crew kept the staff very busy with early morning and late nights plus telling actors when they were due on set ( no mobile phones in those days). Later in 1984 Comic Strip made  The Super Grass. The stars also stayed locally at the Hope and Anchor and Lantern Lodge. John Jarvis was much in demand to help. With many more permanent residents at that time, there are many memories. the canteen, based in the Car Park was enjoyed by many locals, and the shop provided ice creams to Dawn French and Jennifer Saunders after filming, (two for Dawn,) also cochineal which became a constituent of the "blood" in a loo. Iris remembers playing pool with Robbie Coltrane in the Hope and Anchor. Jethro and Barbara were extras having tea on the terrace at the Cottage renamed "The Royal". 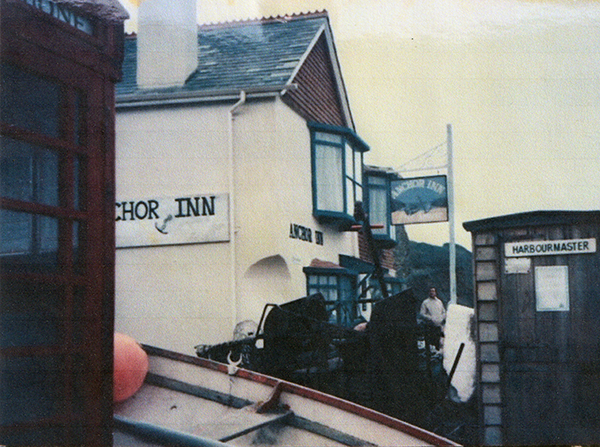 The Watch House was turned into the pub, and a telephone box added to the top of the slipway. John Jarvis used his digger to dig a hole below the water line for one scene, which of course had to be re-dug everyday.

Probably the best remembered scene was of Robbie Coltrane with a chain saw striding along the breakwater, at high tide and in bad weather, he was naturally very nervous and purchased a half bottle of whisky in the shop, and drank a half  before setting off. Out of sight from the cameras John Jarvis rowed his dingy beside him for reassurance and safety. In the film John and Jack are shown outside the "Anchor" watching the walk. As Jack was TT he had to act drinking beer! 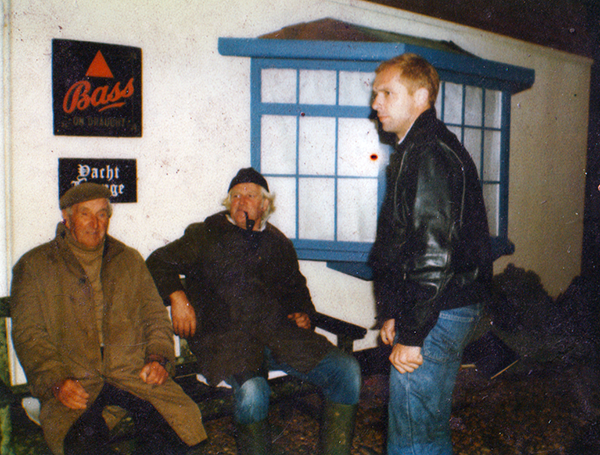 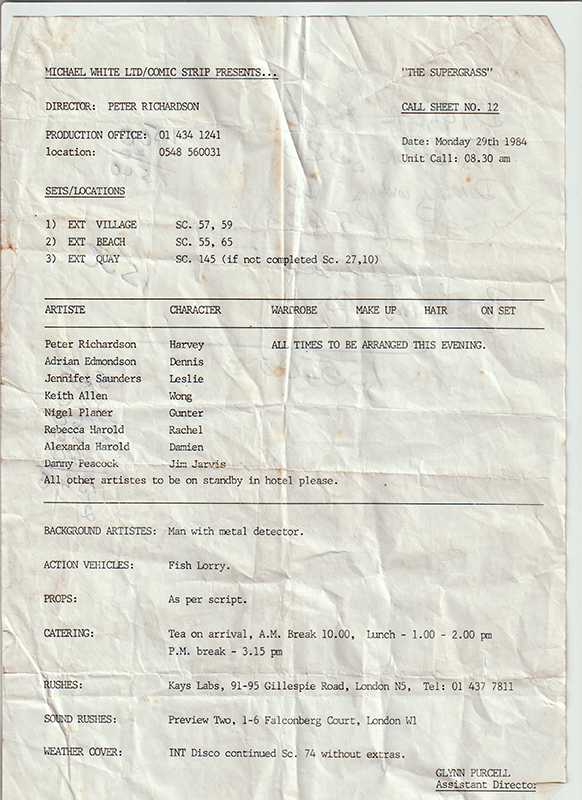 Running order for the day 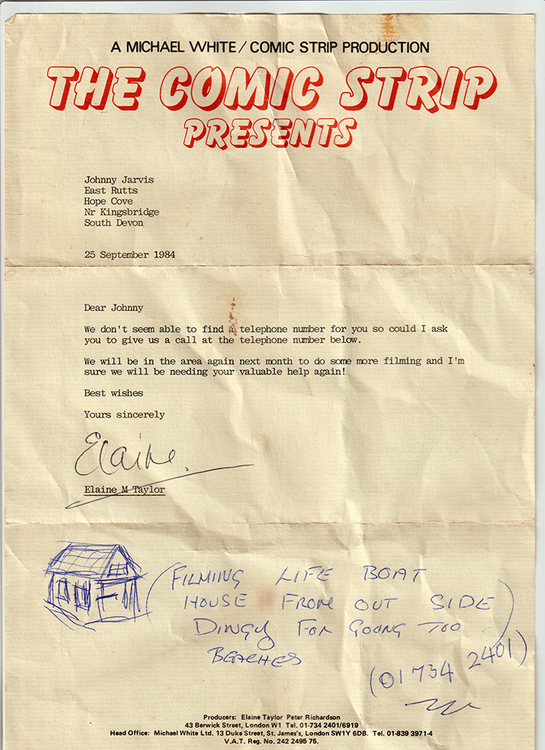 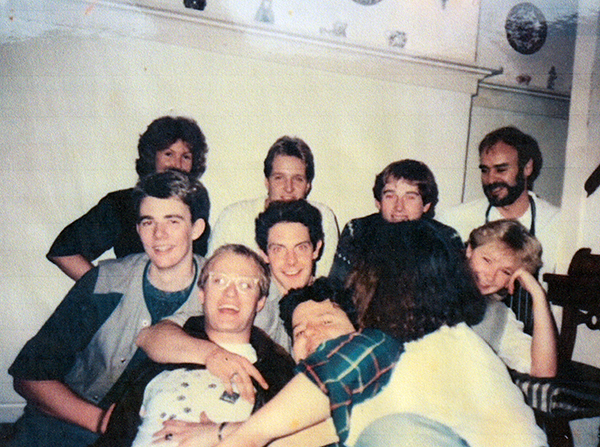 Crew and Locals at Lantern Lodge

Agatha Christie was brought up in Devon, and used the Beach House on Burgh Island for writing. Several adaptations of her work featuring Poirot were filmed around here, and although David Suchet stayed in Buckland-Tout-Saints, some crew stayed locally. Several stayed with Iris and she attended the "wrap" party at the end of filming, This was held in Salcombe.

In the mid 90's I am told that a scene from one of the very many film versions of Treasure Island was shot on Mouthwell beach. We would love to hear from anyone with information.

"Derek" a rather strange TV film starring Ricky Tomlinson  was shot in 2005. The story  was of a Care Home in Torbay, but there are a few sequences in Hope Cove, on Harbour beach.

The Coroner was a series for TV filmed mainly in Hope for 15 weeks in 2015. Shippen House featured as the Coroner's (Claire Goose) home with her mother and daughter. It was fun to look at the continuity as different places around, Dartmouth, Kingsbridge, Totnes etc were woven together.

In 2020, between lockdowns a film for Apple TV was shot here. Many of the actors stayed at The Cottage, the Three Hill Bottom field on New Road was full of vehicles and and a massive marquee, The film was released on Apple TV in May 2020  It is a comedy about adoption called Trying.

Some TV advertisements were shot here. Someone remembers a car ad. being shot in Inner Hope. Any information much appreciated,

Also apparently a " blue " film was also shot here, but only shown in Germany. Any locals used as extras please get in touch !!

Huge thanks to Brenda B, Christine J, and Iris CP  and Owen M for their memories, photographs and documents, and Colin TH for technical help with the pictures and letters. mm

A very photogenic part of the world.