When Emperor Haile Selassie was exiled from Ethiopia from 1936 to 1941, his presence in the Uk was an embarrassment to the government, so he  soon bought a house in the Bath well away from London. He came with a big retinue of family and staff. He has two granddaughters who were sent to boarding school in Cornwall. The Emperor used to drive the girls to and fro, using different routes so that he could see the countryside. There are accounts of him staying in various places, with newspaper articles and photographs, but although I and many others were told that Haile Sellassi came to Hope Cove, and this is quoted in Le Cheminant's book we have been unable to find any proof to back this claim.A visit to Hope Cove isn't mentioned in the book about his time here.

When Haille Selassi left his home in Bath to return to Ethiopia, he have it to the local authority, and today it is an old people's home.

If anybody has evidence of a visit here we would love to know.

We do know for certain  and records show that  Edith Bowes Lyon farmed Pound farm ( now Park Cottage) in Galmpton, in the 1950's. She was  a relative  of Queen Elizabeth the Queen's late mother, but their relationship was not a good one. Lord Mountbatten, much loved member of the royal family did visit and stay at the farm. Sheila Jarvis remembers him around 1950's walking around the village, he gave the children sixpences, so was very popular here as well. Mrs Bowes Lyon brought presents for the local children when ever she returned from her holidays. 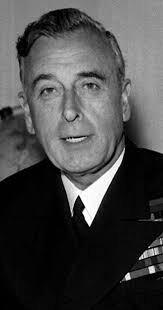 Louis Mountbatten in the 1950's

Another visitor to Pound Farm was Roddy Llewellyn, one time friend of Princess Margaret, and when he was in the parish, was  playmate/friend of John Jarvis