There are four churches/chapels in the Parish. There was a fifth, the Neutral Plymouth Brethren chapel and school built in Galmpton in 1847, and functioning well into the twentieth century, after which it stood vacant for many years and has been a house since the 60’s. Of the four remaining, the Methodist chapel is in the square in Inner Hope. A history of the chapel, built in the 1830’s, can be found on a display at the back of the chapel. St Clements is a Chapel of Ease built in 1861 to ease the journey of the fishermen to St Andrews in South Huish in bad weather. The chapel was built with donations from The Earl of Devon and Sir George Turner. For a short time, the little church also served as a school. A history of St Clements written by past members of the group is available. Look out for the seal and the robin……….

St Andrews, is now a ruin is in South Huish.  The foundations appear to be late Norman, of soft grey slate, with additions made in the 13th and 15th Century using local schist. When St Andrews was no longer used for services, it was left, and within twenty years the roof had gone. The church was slowly dismantled with items being distributed to local churches, and some saved for Holy Trinity. By the late 1960’s there was a crack in the tower and it was smothered in Ivy, and the body of the church full of brambles nettles and fallen masonry. In 1971 the ruin was listed at Grade ll and was declared redundant. Once a church is declared redundant, it faces one of three fates, demolition, vesting it with the Redundant Churches Fund, or a new use. An attempt was made to try and move it to another place but this was stopped, demolition seemed likely until the Chairman of the Redundant Churches Fund recommended a long lease to the Friends of Friendless churches. Finally a 999 year lease was signed in 1976. Major works were undertaken to stabilise the building in the 70’s 80’s and 90’s. Now a service is held each summer in the ruin. 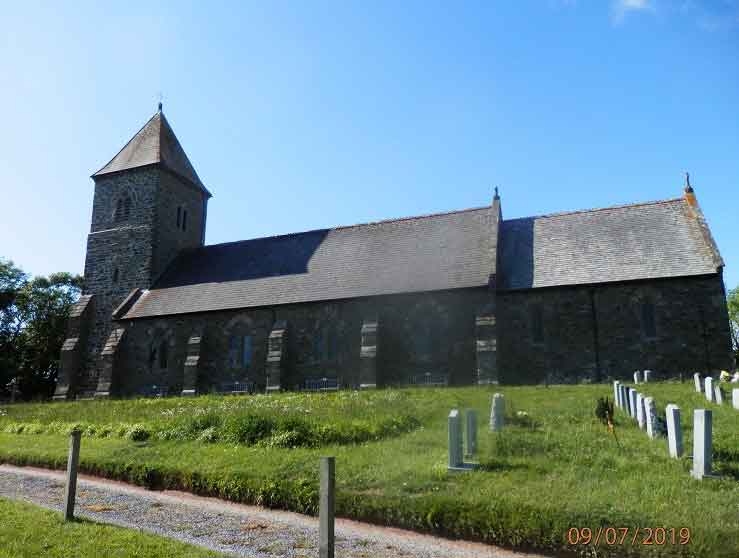 The parish church is Holy Trinity at Galmpton, is celebrating its consecration 150 year ago this June. Holy Trinity, was built and licenced for services in September 1868. It was built to replace the damaged church of St Andrews in South Huish. It was consecrated by the Bishop of Gibraltar in June 1869. Yes the Bishop of Gibraltar! Holy Trinity is well worth a visit; inside you will find the font and some alabaster fragments rescued from St. Andrews, beautiful chancel windows given in memory of Sir George Turner the Lord Chancellor of England, and some marble memorials including the WW1 memorial. Outside there are some very interesting graves. A new book of the church history and explaining such things as why the Bishop of Gibraltar, why Sir George Turner is commemorated, why one grave stone is a rough carved block of granite; who was shipped home from Black Tickle in Canada for burial, this and much, much more information, is available in the new book.

If you have any memories or photographs of Holy Trinity Tom Windle would like to know for the anniversary, look out for local anniversary events, including a Flower Festival in September. maz