The essay below  was written in 1974 by a young woman called Hazel Leslie. Hazel was born in the village in the 40s. Her uncle was Bill Thornton a member of a well-known fishing family. Her family moved away in the 50s. Somehow the notes came into the possession of the wonderful local resident Elaine Grey who gave it to her Granddaughter Shelley Birchmore. Shelley has kindly passed it on because it deserves a wider audience.

Hazel captures a more gentle time but a time when change was starting to happen. Her uncle and aunt were representatives of an old Hope Cove that has slipped away.

Slowly, doggedly, the procession moves through the dawn that is rising over the fields on either side. Most of us seem to be carrying all our worldly goods with us. Now and again, exhausted, someone drops out. From time to time we grind to an unexpected halt, then, just as inexplicably, we are on the move again.

We are on that great English refugee route, the A30, which starts out boldly near London as the M3, joins the A303 before Andover and the dwindles dreamily on in ever-increasing numbers into the south-west until, as the A381, it meets the sea at Salcombe in Devon.

They’ve done their best with it on the busiest bits, hacking out the verges, tacking country lanes together to make dual carriageways and one-way systems which the speeding traffic shares with tractors and combine harvesters.

But still they come, and so this road, which once led to a part of England no one cared about, now leads to some very expensive bits of real estate indeed.

What can we all be coming to see - apart from one another? Well I’ve come to see my uncle and aunt in the village where I grew up. My uncle, who is now nearly 80, earned his living by lobster fishing until that petered out. He and my aunt have lived in the same cottage in the sea-side square for 40 years. 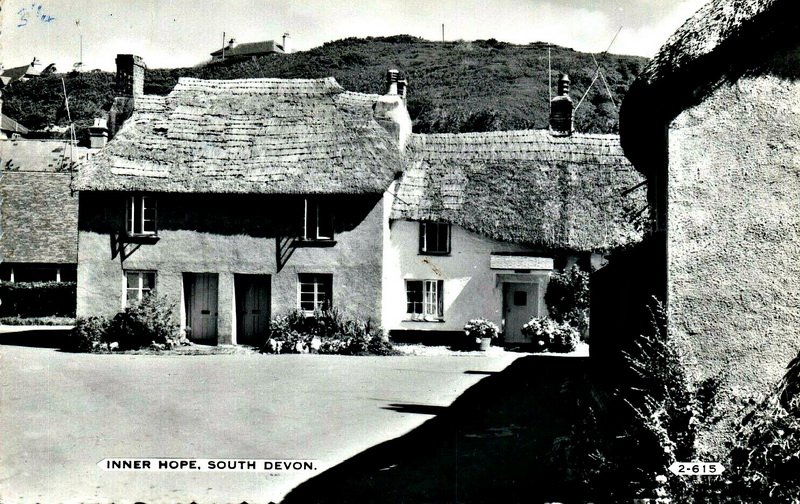 “He’s up in the rabbit house,” says my aunt, treasurer of the village hall for several decades and the speediest knitter of them all, as we sat drinking the first of a hundred cups of tea in the green light that filters through the lemon tree outside, while two people take snaps of us through the window.

In his wooden hut which smells of clover and sawdust, among the apple trees above the square, my uncle is looking thoughtful. He has very sunken blue eyes and a hooked nose. He looks rather French like a lot of Devonians. Since he retired he spends a lot of time up here among the big eyes and trembling noses and munching teeth, plotting new show tactics. 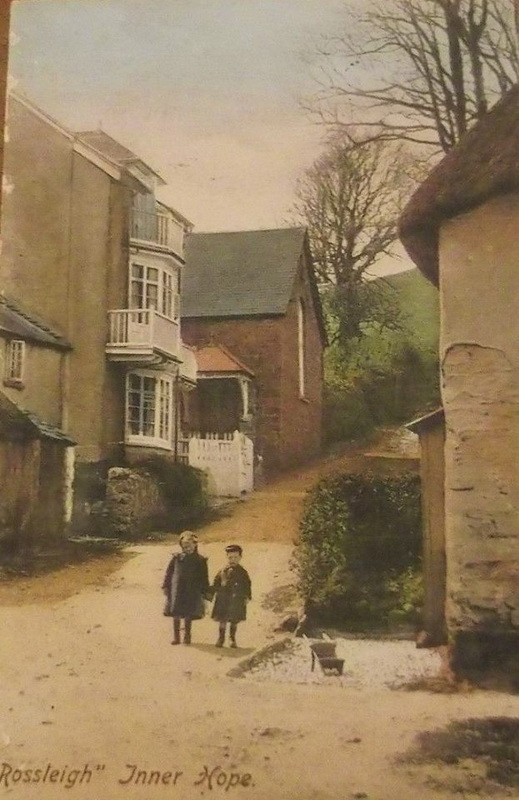 Figure 2 From the Square to Bolt

At one time, when his sight was better, he would proceed grimly along the brow of the lanes, at a speed of not more than 20 m.p.h., in a borrowed Austin Seven, to entrust them to the guard at Kingsbridge, who undertook most things from releasing carrier pigeons to delivering parcels.

We walk up the path to the edge of the cliff, my uncle on the lookout with his clover basket, through a seductive green tunnel of trees which smells of earth, damp grass, the bitter tang of dock leaves, and the occasional heady whiff of honeysuckle.

Outer Hope, wildflower competitions at the village show: the smell of mortality in the tangled churchyard at Galmpton; my uncle bell-ringing on summer mornings and coming in late to the service. No one can quite understand his passion for bells now and this year, for the first time since the war, there were not enough ringers in the village to enter for the Deanery competition. He cheers himself up, however, by singing hymns on Sundays at two churches and the Baptist Chapel.

At the end, below the green shoulders of headland edged with sea pinks and rabbit droppings, the Channel sparkles and licks its lips. Any number of ships have come to grief on the red rocks below. As a child I was told that the 18th century villagers used to lure them in with lights, and then cut the survivors fingers off for rings – unlikely I always thought, when I looked at my uncle chatting on the slipway, placidly chewing a blade of grass.

He can remember a good many of these wrecks. The last grain clipper, the Herzogin Cecile, ran aground in the Starehole Bottom; and a mail ship called the Jebba whose passengers included a monkey; and in 1914 the Jane Rowe during which rescue he nearly went down with the lifeboat.

At that time there were 30 fishermen here, all related, like most other people in the village; but over-fishing by bigger boats has destroyed that livelihood. Now there is only one, who supplements his income with boat trips for visitors.

The trade in holidays and retirements is nothing new to Devon, as the rambling houses built around the village between the wars and the grander mansions in Salcombe still testify. In the 20’s and 30’s it was a favourite place for those long middle-class summers. Stout maiden aunts strode the cliffs in all weathers wearing good woolly stockings and good serviceable brogues. Young men who fancied themselves as artists dabbled in watercolours, a few of which still survive in dark cottage corners.

These regulars have disappeared now, like the Edwardian villagers in the curled sepia groups in the empty Reading Room just off the square, where no one comes any more to play billiards or to read the Western Morning News. Village life of the old kind died a quick and quiet death here by tourism, after the second World War, before we all got interested in preserving it.

Quite recently the square was scheduled as an ancient monument, but no one is really quite sure what this means, though everyone had official letters about it. It certainly hasn’t stopped a developer from building two caricature concrete holiday cottages along one side, which had to be twice as high as the old ones to meet modern health requirements.

The designation of this piece of coast as an area of outstanding natural beauty has not prevented the building of villa estates which makes no concessions to their surroundings on the hillsides around the village.

Local people were depressed when they first heard about these plans and someone drew up a petition, but it never came to anything. Devonians are inward and secretive. They don’t visit each other much; if they talk it is out of doors, in the road or down by the sea wall.

When it comes to declaring themselves on a matter of local policy the feeling is “Best keep quiet” It was not so long ago, after all, that these villages stood on land owned by big estates, and you could be thrown out of your own house for voicing an opinion. They know, in any case, who has the upper hand now – those who are anxious to turn holidaying into hard tourism most of whom are not Devonians at all.

As it happens my uncle, who is very gregarious and also curious about his fellow man, rather likes things as they are. He gets a lot of company and kindness from the new people in the village, to whom he must seem a quaint and likeable survivor from another age.

So he and my aunt sit snugly before their fire at the bottom of the square among the embroidered ships that my uncle worked in the winter evenings 50 years ago, and the bits of china and photographs of themselves that visitors have sent them. They and a few others remind people of another world that attracted the first holiday makers. When they are gone it looks as if there will not be much left to remember it by.

Details of the wreck of the Jebba - mentioned by Hazel’s uncle Bill Thornton – can be found at this web address https://www.submerged.co.uk/jebba/